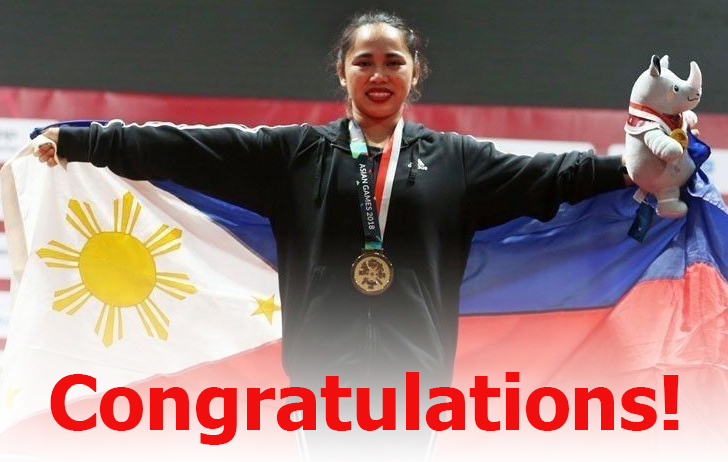 MANILA, Philippines (Updated 8:48 p.m.) – Hidilyn Diaz will make her fourth Olympic appearance in Tokyo in July and try to fulfill hopes to secure the Philippines’ first gold medal in the quadrennial event.

The 30-year-old Diaz finished fourth in the Asian Championships in Tashkent, Uzbekistan to formally claim her spot in the Summer Games from July 23 to August 8.

She cleared 94kg in the snatch while only lifting 118kg in the clean and jerk in her first attempt. She failed to clear 121kg and 122kg in her second and third attempts, respectively.

But regardless of the result, the Asian and Southeast Asian gold medalist accomplished what she originally came for — a spot in the Summer Games where she will join gymnast Caloy Yulo, pole-vaulter EJ Obiena and boxers Eumir Marcial, Irish Magno, Nesthy Petecio and Carlo Paalam.

By coming to Tashkent, Diaz had already completed the five-tournament requirement that paved the way for her fourth Olympic stint.

Diaz is ranked No. 2 out of the eight who will qualify per division.

Liao and Li will contest the right to represent China in the division since a country can only field one entry per class.

It also marked fourth time that Diaz will be waging a war in the Olympics after taking part in 2008 in Beijing, China, 2012 in London and 2016 in Rio.
And for Diaz, the real battle will be fought in Tokyo.

“Hidilyn doesn’t have to win this one, the real battle will be in Tokyo,” Samahang Weightlifting ng Pilipinas president Monico Puentevella told The STAR. “We’ll know the strength of the Chinese favored lifter too.” — With reports from Joey Villar