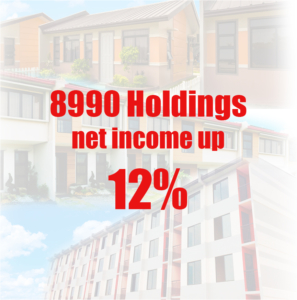 Revenues rose 15 percent to P3.5 billion during the period.

The company delivered a total of 2,291 housing units, up four percent year on year.

This follows 8990’s exceptional performance in 2019 with net income rising by 19 percent to P5.6 billion on record revenues of P15.3 billion.

8990 acting president and chief executive officer, however, said they expect a softening in the second quarter given that non-essential businesses nationwide, including real estate, had to stop operations mid-March.

For the second half, the company is focusing on increasing revenues and maintaining liquidity as well.

The company expects both the lockdown and the passage of the Bayanihan Act to cause a big drop in collections during the second quarter but a rebound in collection is expected after the lifting of the moratorium.

8990 has 15 projects nationwide, which are all expected to contribute to the company’s topline by the end of the year.

Its first flagship project in Metro Manila, Urban Deca Homes Manila, is projected to bring in half of the total revenues for the year. The project has an estimated total sales value of P20 billion.